As we head into this Memorial Day weekend, let us pause to reflect for a moment upon an especially bloody week in international pop music wars. On this side of the pond, we have one fallen Archuleta — but Cook is now King, and thankfully all is quiet on the American Idol front. Meanwhile in Europe however, the battle rages on: Since only Tuesday, 20 musical dreams have been rapidly dashed in the Eurovision Song Contest semifinals, with that many and more set to go down in (often literal) flames at tomorrow’s final in Belgrade. 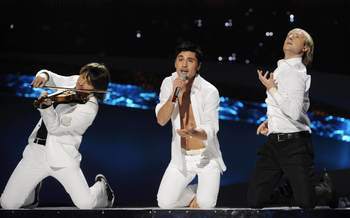 While Eurovision 2008′s semis on Tuesday and Thursday went mostly as betmakers had predicted, notable carnage included Ireland’s turkey handpuppet entry Dustin getting dustbinned, and Bulgaria’s techno throwback Deep Zone getting, well, deep zoned. Surprise survivors include this year’s only American-born dog in the race, Seattle-born Isis Gee (short for the God-bless-you-inducing Gołębiowska), who’s competing for her husband’s native Poland with “For Life.” While easily sporting the most unnatural tan and teeth of all 25 remaining finalists, Gee hasn’t an orange Yankee snowball’s chance in Serbia of winning, being neither really Slav nor diva enough to face this year’s field.

For indeed, the Eurovision 2008 stage is now firmly set for Dima versus Diva: Slavic Smackdown. In the eastern corner, we have Russia’s sensual and intense Dima Bilan, returning from his surprise defeat in 2006 to Finnish rockers Lordi, and praying that this year’s Finn-rockers Teräsbetoni won’t pull off any sort of similar upset (though shortening betting odds suggest that they just could). In the only-slightly-less-eastern corner comes Ukraine’s Ani Lorak, the sultry dance diva bent on giving Bilan a high energy run for his rubles. Adding to the tension, waiting nearby in the wings for either one to falter is another super-diva, Sweden’s Charlotte Perrelli, who as the 1999 Eurovision champ knows better than either how to get the job done.

Bilan, the heavy favorite going into this week, ruled Tuesday’s semi with a writhing, all-in-white, barefoot performance of his Timbaland-helmed personal faith mantra “Believe,” while — we shit you not — Russian gold medal-winning figure skater Evgeni Plushenko pirouetted around him on a mini ice rink. Meanwhile Lorak brought it bigtime to Thursday’s semi, humping in, out, and on top of magical light boxes with her incredibly infectious “Shady Lady.”

Aging diva Perrelli and her decent “Hero” stands the best chance in years (in fact, since her own win nine years ago) of bringing the prize back to Sweden, but she faces very tough competition this year — it’s been cattily noted that even Perrelli’s dress is worn far better by Lorak. Further back in the Eurovision pack but just within shooting range stand two more hungry divas, both with Middle Eastern tinges: Armenia’s Surisho with “Qele, Qele,” and Greece’s Kolamoira with “Winning Combination.”

In case Europe’s tastes happen to lean rock-ward again this year, it’ll have a number of well-amplified contestants from which to choose, including aforementioned Finn head-bangers Teräsbetoni with “Missä Miehet Ratsastaa,” first-time competitors Azerbaijan’s Elnur and Samir with the admirably rock-operatic “Day After Day,” and Turkey’s cute-if-a-bit-lackluster Mor ve Ötesi with “Deli.”

And should Europe go totally off its nut, there’s (as usual) an entry to fit that bill perfectly too: Bosnia & Hercegovina’s Laka, with the truly touched “Pokusaj.” Eurovision officials had to politely inform Laka he couldn’t bring with him the live chicken that helped win him the Bosnian final. No worries, said Laka, for the chicken made a lovely meal. One wonders if he bothered to cook it.

Tomorrow’s final will also mark the first appearance on the playing field by the United Kingdom, France, Spain and Germany (the Big Four, as they’re called), as well as Serbia (last year’s winner), none of whom have had to compete in the semis. Though France’s entry, “Divine,” is actually from noted hip dance music maker Sebastian Tellier, Serbia seems to be the only one of these five with any shot at the Eurovision prize via Jelena Tomašević’s “Oro”; but even her chances seem remote given the song’s pronounced similarity to last year’s winner, Marija Šerifović’s soaring sappho-ballad “Molitva.”

Which way will the Euro-blood inevitably run? We humbly predict that Ani Lorak will send poor Dima Bilan back to Moscow with his second second place defeat, and next year’s Eurovision madness will go down in Kiev (but it’ll be close, and frankly we’ve got money on each). Tomorrow beginning at 3pm Eastern, watch for yourself and wallow in the costumes, the camp, the feathers, the fire, and the irresistible high drama that is the Eurovision final.