Pretty and stylish, clean and compact, friendly and unassuming, Helsinki is basically the epitome of Finnishness itself. Not quite Scandinavian and certainly not Russian, Finland (to locals Suomi, pronounced SWAH-mee) is a unique northern realm that’s been heavily influenced (a nice way of saying “previously ruled”) by both neighboring civilizations for centuries, but ultimately retains a culture, vibe and language that are proudly all its own. Hip Helsinki, it’s biggest city, is the world’s second northernmost capital (after Reykjavik) and home to one in ten Finns, or about half a million people.

Design-savvy gays know that Helsinki’s been a hotbed of architectural and interior style for decades, revered for the unique Finnish ability to merge simplicity with tasteful flair, as displayed by such giants as Alvar Aalto, Iittala and Marimekko. Finland’s long been on the radar of film fans as well, with its fairly eccentric array of great directors like the Kaurismäki brothers. In recent years Helsinki’s quirky music scene has taken off too, with wildly divergent acts like electronic hipsters Pepe Deluxe, trance man Darude, and heavy metalers HIM (the first Finnish band to hit U.S. gold) and Lordi. 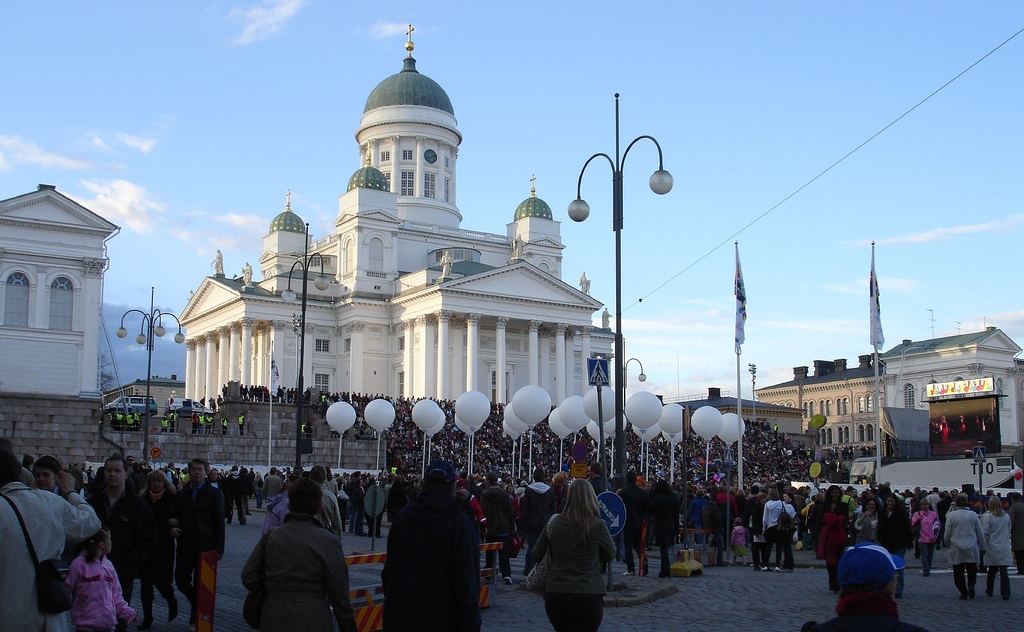 Weather-wise, let’s just say Helsinki’s lucky to be brimming with so much fantastic culture, because chances are you won’t be coming for the climate, at least not most of the year. Winter days are painfully short, with sunlight lasting only about six hours, rendering many locals understandably cheerless. Couple this with the cold (high temps rarely push past freezing) and snow (several inches of the stuff generally coat the ground from November through March), plus the fact that most of Finland’s best winter sporting sites are beyond day-trip reach from the city, and it’s easy to see how saunas and alcohol got so popular here.

The good news (other than the saunas and the alcohol) is that on the other end of the weather spectrum, the sun never really goes out at the height of Finnish summer, and daytime temps usually hover around a near perfect 70-75 degrees Fahrenheit. The Finns of summer, suddenly tanned and bubbling over with happiness for a few quick months, are often barely recognizable from their winter selves.

Helsinki’s gay scene is booming and diverse, but it’s worth noting that it mostly bears little affinity with the fetishized world of its famous son, Tom of Finland. To be sure there are manly men, but the girly (both male and female) thrive in Helsinki harmony too. So generally accepted is homosexuality here that Finland’s very president, Tarja Halonen, was once the chairman of SETA, the country’s LGBT rights group.

This article is also online here. It originally also included a full Helsinki venue guide, which is no longer online since TripOutGayTravel.com became NewNowNext.com.