Ever since ABBA rocketed to stardom by winning the Eurovision Song Contest for Sweden in 1974 (beating Olivia Newton-John, no less), the Scandinavian country has taken the pan-Euro crooning competition especially seriously.

Hence the annual six-week Melodifestivalen contest, which picks Sweden’s all-important Eurovision representative, and is one of the nation’s most closely-watched camp spectacles. This year brought no shortage of over-the-top melodic Nordic antics, including a barefoot entry by creepy actor Thorsten Flinck and a bizarre love-rap by orange-hued author Björn Ranelid.

In the end though, it all came down to two former Swedish Idol finalists: Loreen, who placed 4th in 2004; and Danny Saucedo, who came in 6th in 2006. Interestingly, both are second generation Swedes; Loreen’s parents hail from Morocco, and Danny’s, Poland and Bolivia.

Going into Saturday’s final in Stockholm, odds makers predicted it would come down to these two for this year’s Melodifestivalen crown. Most watchers agreed that she had the better song, while he, the better performance (with a glow-in-the-dark suit reportedly powered by 500 batteries).

But ultimately, Melodifestivalen is a music competition, and Loreen’s high energy dance song, “Euphoria”, had already shot to the top of the Swedish pop chart — not to mention its instant-classic status in gay dance clubs across Scandinavia, always a clear sign of Eurovision success. 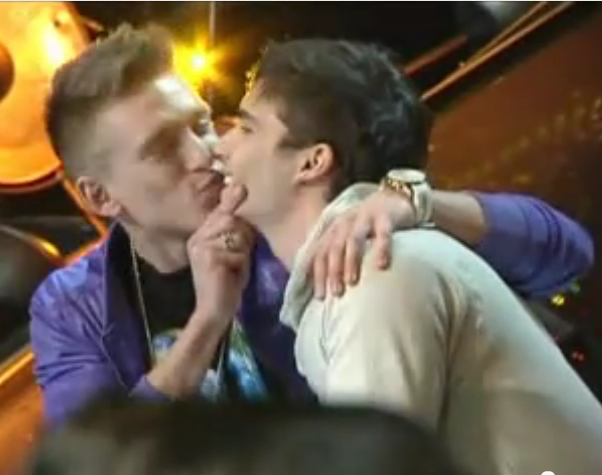 Danny, for his part on the gay tip, told Sweden’s QX magazine in 2007 that while he used to “watch the guys” in high school, he “probably would not be able to have sex with a guy.” Still, he seemed to have little problem locking lips with 2011 Melodifestivalen winner Eric Saade at a press conference last year (above).

When the theatrics were over and the scoring for 2012 was tallied, Loreen handily bested Danny’s “Amazing” by a comfortable margin of 70 points. As the folks at the UK’s So So Gay put it about the winner, “The 28-year-old is a diminutive Bjork-esque performer with moves reminiscent of ‘Wuthering Heights’-era Kate Bush. What more could you possibly need?”

Loreen will now move on directly to the second semi-final of the Eurovision Song Contest in Baku, Azerbaijan on May 24.