A onetime Yugoslav republic embraces equality via one of Europe’s most sweeping sets of LGBT rights laws. It’s a shame too few of its gay citizens are out enough to put them to use much. 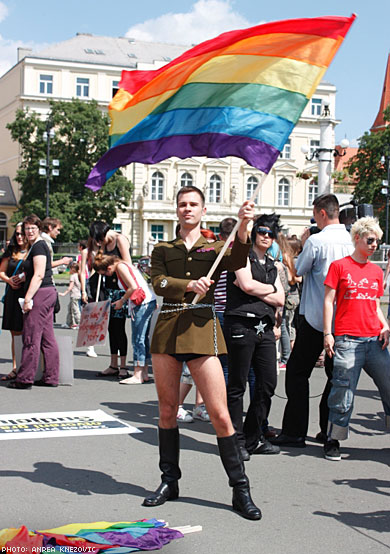 With its idyllic Adriatic-hugging coastline, the land now known as Croatia has been favored by Europe’s rich and famous since Roman times, when Emperor Diocletian retired here to his homeland some 1,700 years back. Its tourism star may have temporarily dimmed during decades of dictatorship and a subsequent war for independence late in the 20th century, but the Croatian nation is now firmly on the fast track toward reclaiming its former foreigner-luring glory.

This gorgeous Balkan country of 4.5 million has modernized rapidly, in the process becoming something of a gay rights dichotomy: Gays and lesbians here actually have more legal protections than their Italian neighbors, but there’s only one officially gay establishment (Zagreb’s g.bar) in their entire nation, and the homo populace remains largely invisible.

That hasn’t daunted the ever-growing droves of gay Americans who are flocking to Croatia, mostly to the country’s sun-soaked Dalmatian Coast and its pink-friendly (and history-packed) beachfront towns of Dubrovnik and Split. Natives will explain, however, that the country’s most homo-forward cities are actually Rijeka in the northwestern province of Istria and, to an even larger extent, the capital Zagreb.

“Zagreb gets more and more gay tourists every year, and is already becoming the new destination of interest for many Europeans,” says Marko Jurcic, a self-styled queer, feminist, and anti-fascist activist, and one of the main organizers of Zagreb Pride, which just saw its eighth incarnation on June 13 (the largest to date, with an estimated 600 to 800 participants).

Jurcic says Zagreb Pride sees an increase in foreign visitors with each passing year, as does Queer Zagreb, the city’s vibrant and highly respected arts festival that’s held annually in May.

While Croatia is widely considered a safe gay destination, several incidents of queer tourist bashing were reported in the Split area in 2006, leaving one British man with a concussion, another with part of his ear bitten off, and a German with his nose broken. A group of Spanish lesbians were also attacked after allegedly kissing on a public beach; the next year, the same beach sprouted homespun signs cautioning “No Gays.” “Nevertheless, in most of the popular tourist destinations and on the islands there are gay and gay-friendly beaches, and the local population is usually OK with us,” assures Jurcic. “Tourism is the key Croatian industry, and any kind of hate crime to tourists can become a great national scandal.” Accordingly, 2006 also saw the passage of Croatian hate-crimes legislation, the first of its kind in Europe, which was first applied the following year to a man who attempted to hurl five Molotov cocktails into the 2007 Zagreb Pride crowd. While pride events since have been safer, counterdemonstrators still show up in force, and this year even reportedly used Web tools like Facebook to organize. “Invitations to kill all the [pride] organizers, along with our photos, appeared on a ‘white power’ website,” says Franko Dota, a Zagreb-based master’s student in LGBT history and Italian media correspondent. “They posted a YouTube video calling for the destruction of LGBTIQ people, and showing neo-Nazi rallies in Eastern Europe.” Dota says that while 2009′s pride was violence-free (save for the stray volleys of empty beer cans and old mobile phones), police did nothing to quiet the mostly neo-Nazi antigay demonstrators, who yelled such charming slogans as “Into concentration camps with the faggots!”
Despite such shocking scenes, Croatia is a land that officially respects its gay citizens, by for instance granting same-sex partner relationships of more than three years the same cohabitation rights (like inheritance) as their heterosexual counterparts. Yet laws on the books don’t always translate to freedoms in the streets. “It’s true that Croatia has legislation that protects some LGBTIQ rights, and the situation is worse for gays in other countries of the former Yugoslavia and the Balkan region — but they have it really bad, so being better than that is not so great,” says Croatian culture journalist Gordan Duhacek. “Too many of us have studied or traveled abroad and know how much better it should be here,” he adds. “Vienna and Budapest, the closest capitals to Zagreb, have literally hundreds of gay bars, clubs, bookshops, etc. One of the biggest problems is that our own LGBTIQ community is still mostly in the closet. I’m not sure that even Harvey Milk could get those people to finally come out. And it’s clear that no sweeping, major changes will happen without a lot of gay [Croatian] people saying, ‘I’m here, I’m queer — get used to it.’”