In an case of bisexual and interspecies love that could make Rick Santorum’s head explode, a boar called Kalle has become irresistibly smitten with one of his Swedish farm mates, a breeding bull named Sune Mangs. 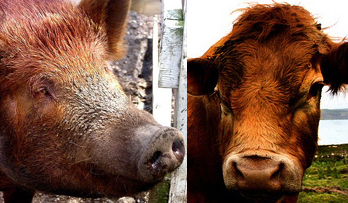 The unrequited love affair began about a year ago on the Källunda farm in Häglinge in Sweden’s southern Skåne region, when Kalle spotted Sune in a nearby pasture and jumped a fence to be near him.

Kalle then “started to court” Sune — “or rather, tried to mount him,” farmer Magnus Nyman tells Swedish news site The Local. “The bull was very embarrassed.”